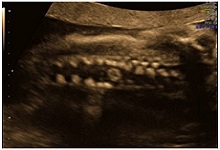 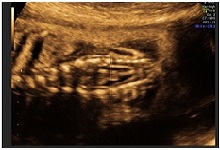 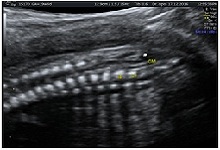 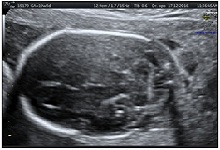 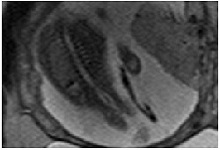 Introduction
Diastematomyelia (also termed diplomyelia, pseudodiplomyelia, dimyelia, and split spinal cord malformation syndrome) is a rare developmental deformity in which the spinal cord is separated into two parts by a rigid or fibrous septum. The incidence of diastometomelia is unknown and deformity is often accompanied by abnormal development of the vertebrae.1

Case
One such case was a Primi 18+6 Mrs X who was referred to Apollo Centre for Fetal Fedicine, New Delhi. The anomaly scan at ACFM confirmed the diagnosis of Split cord malformation. Divarication of the fetal spine was seen at the thoracolumbar level(below T 12). Figure 1b. There did not appear to be any mass lesion and the overlying skin was intact. However, the spinal cord appeared tethered, the conus medularis ending at L5 S1 level. Figure 1c. Both the lower limbs were seen to be moving well.

Fetal brain appeared normal. Fetal growth and amniotic fluid was normal. There was no other structural defects nor any markers for chromosomal abnormalities. The couple was explained that cutaneous stigmata(like hairy patch, capillary hemangioma could be seen in 30% of the neonates and is not identifiable on ultrasonography antenatally. They were explained that diastometomelia is a treatable condition but the baby may require postnatal neurosurgery after birth.

MRI done at Apollo Hospital confirmed the diagnosis of Diastometomelia, figure 2. The couple had a detailed discussion with the neurosurgeon who explained them the prognosis of the baby and the good outcomes of the neurosurgery if at all it will be required. She was send back to her referral obstetrician

The couple decided to continue with the pregnancy and had a follow up with us at 32 weeks. The fetal growth and Dopplers were normal. Good fetal movements were perceived by the mother and were seen on the scan as well.

The woman had an emergency caesarean section at her local hospital at 38 weeks in view of preterm rupture of membranes followed by non reassuring fetal heart rate pattern. The baby weight was 2kg with an APGAR score of 9,9. Post natal MRI showed cord tethering and the baby was planned for surgery at 6 month. However, a repeat MRI at 4 months showed the diagnosis of Diatometomelia type 2(milder form) and the baby was decided to be kept on conservative management. The baby at 6 months of age is doing well.

Discussion
Diastematomyelia is a rare congenital anomaly that results in a longitudinal split of the spinal cord. There are two types of disease entity knwon. Type 1 and Type 2.

In type I, the two hemicords are typically separated by a fibrous, cartilaginous, or osseous septum and reside in two separate dural tubes (Figure 7). Whereas, in Type II split cord malformations both the hemicords lie withina single, non-duplicated, dural tube[2].

The majority of patients with diastematomyelia when they grow up are symptomatic, presenting with signs and symptoms of tethered cord, although patients with mild type II may be minimally affected or entirely asymptomatic. Presenting symptoms include: leg weakness, low back pain , scoliosis, incontinence making an individual dependent for life. Another indication of this syndrome is abnormal skin in the lumbosacral region, which may be a hairy patch (hypertrichosis), a pigmented area in the midline, or a dermal sinus[4]

Prenatal Diagnosis: Diastometomelia may go unnoticed by an unexperiened but the presence of an echogenic structure extending from the posterior elements to the posterior aspect of a vertebral body, has high specificity for diastematomyelia[5, 6,].

One third of the patients have an associated spinal dysraphism. The disease has a better prognosis when isolated. So care should be taken to rule out other neural tube defects. Prenatal MRI can be used to confirm the diagnosis of diastometomelia and to rule out other structural defects in the fetus.

Prognosis: The overall prognosis of diastometomelia is good and when indicated, surgical intervention includes decompression of the neural elements with excision of the interposing tissue and reconstruction of the duplicated
dural sacs.