There are few things as intriguing in fetal anatomical survey as the fetal brain. The evaluation of the evolving brain poses a great challenge in interpretation and subsequent diagnosis . This is further complicated by possible recurrence of these abnormalities in subsequent pregnancies.

The Apollo Centre for Fetal Medicine attempts to cover it all for you.

With a keen interest in Fetal Neurology, the team comprising of Dr Akshatha Sharma and Dr Anita Kaul have maintained a neuro-directory with referrals of cases and their outcomes. They have been supported in their endeavour by the one of the leading lights in fetal neurology – Dr Karina Krajden Haratz, Senior Physician at the Ultrasound Unit in Obstetrics and Gynecology at the Lis Maternity Hospital – Tel Aviv Sourasky Medical Center (Ichilov) and a world expert in Fetal Mid and HindBrain Disease.

The workflow begins with a detailed Neurosonogram (Ultrasound) with the in-house specialists followed by the requisite investigations such as Amniocentesis, Genetic testing, Fetal MRI and detailed counselling. The compiled reports are then discussed with the international expert when necessary so as to guide management and prognosticate the outcomes.

Digital consultation and counselling by Dr Karina Haratz can be availed if the patient so wishes once history has been ascertained and fetal brain volumes / images acquired by the Local team sent to her.

As a part of their commitment to increase awareness on fetal brain pathology , the team arranges for yearly Neurosonography Masterclass with Dr Karina Haratz which is well attended by Fetal Medicine Specialists from all over India. 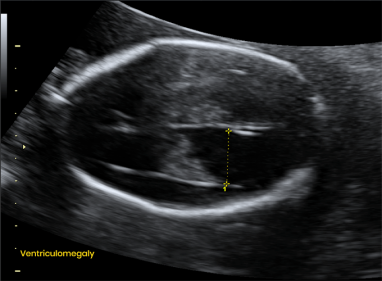